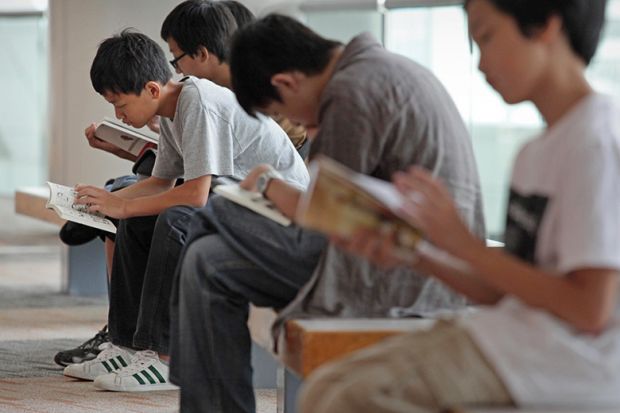 Source: Getty
Brought to book: Singapore is ranked top in reading, science and maths, according to the OECD’s PISA rating

Smaller European countries such as the Netherlands and Asian city states like Singapore are among the world leaders in terms of high-quality education research, new data suggest.

According to bibliometric data from Elsevier’s Scopus database of scholarly publications, research outputs from the Netherlands, Belgium and Switzerland are all cited 50 per cent more than the average world publication in the field.

Hong Kong and Singapore are also notable by their position in the top 10 countries for education research by field-weighted citation impact (FWCI), which allows for differences in citations according to subject and year.

Both Asian territories figure highly in the Organisation for Economic Cooperation and Development’s international rankings on school systems: the Programme for International Student Assessment (Pisa). Singapore was top in science, reading and maths in the last rankings while Hong Kong was second in maths and reading, and ninth in science.

European nations that were relatively successful in Pisa are also among those that make the education research table: the Netherlands, Belgium and Switzerland consistently reached the top 20 in Pisa (apart from Switzerland in reading) while Finland (fourth on citation impact) was in the top five for science and reading.

Steven Scheerooren, from Elsevier’s analytical services, said the education research data – which was filtered to only include nations where there were at least 500 pieces of research between 2012 and 2016 – revealed a “tendency for the higher ranking countries in FWCI to also have a higher productivity” in terms of publications per author.

Topping a list of the countries with the highest productivity for education research is Cyprus, with a rate of 1.31 publications per author, followed by New Zealand, with 1.10 publications per author. Both countries also come first and second in terms of the places where education research forms the largest share of a nation’s total scholarly output.

Mr Scheerooren noted that the list of countries where education takes the largest chunk of the total research output included nations with patchier records for academic freedom, such as the United Arab Emirates, Indonesia and Turkey. However, he added that there was no discernible link between output share and quality.

Meanwhile, countries publishing the largest volumes of education research, like the US and UK, only appear in the top 10 for output share once the list is filtered to only include countries with a certain number of publications. And neither is in the top 10 for quality, unless a publication volume floor of 1,000 is applied for the UK or 2,000 for the US.

John Jerrim, reader in education and social statistics at the UCL Institute of Education, who has studied Pisa extensively, said that while it was interesting to compare research quality with nations’ performance in education, he would be “rather cautious” about directly linking the two.

He added that the quality of research in education was “always” down to the individual researchers involved. “There is some terrible research published in ‘very good’ journals, and some brilliant research in not so good journals,” he said.

Dr Jerrim said that in terms of countries, his experience of education research meant he “would lean towards a slight advantage towards North America in terms of quality over Europe”.