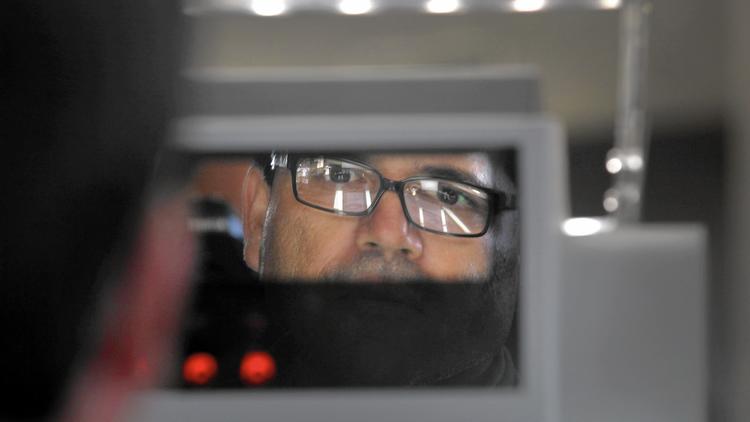 For the first time on the U.S. southern border, authorities are conducting facial and iris scans on foreigners entering the country, part of a congressionally mandated effort aimed at cracking down on those who remain in the United States with expired visas.

Under a pilot program launched last week at the Otay Mesa port of entry, U.S. Customs and Border Protection is gathering biometric data from most non-U.S. citizens entering through the pedestrian lanes. Starting in February, the agency plans to also record their departure.

“We need to verify that the person that came into the United States is the same person that’s exiting the United States,” said Joe Misenhelter, assistant port director. “This is a test to determine in the pedestrian environment whether we can do that with this technology.”

Congress has for years been pressuring the U.S. Department of Homeland Security, which oversees the customs agency, to keep track not only of those who enter the United States, but also those who leave. A 2006 study by the Pew Hispanic Center estimated that between 40% and 50% of the country’s unauthorized population involves “visa overstays,” people who enter the country legally with non-immigrant visas but remain after the visas expire.

The pilot program relies on new technologies that in recent years have expanded the possibilities for biometrics, which uses physical characteristics to identify an individual. While law enforcement agencies have long relied on fingerprints to determine identity, new methods that read the iris — the colored part of the eye — as well as facial characteristics such as bone structure are able to identify individuals at a distance