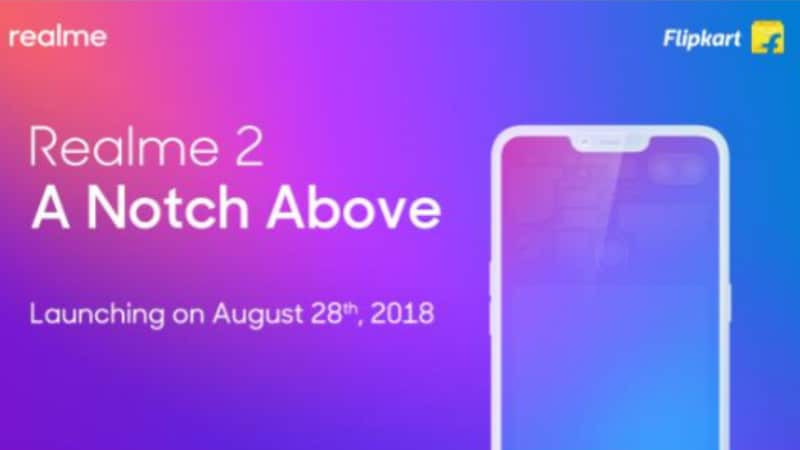 The Realme 2 is set to be powered by a Snpadragon SoC.

After teasing the device on Flipkart, Realme has now confirmed that the Realme 2 will be exclusive to Flipkart this time. To recall, the Realme 1 was exclusive to Amazon, when it launched earlier this year. Furthermore, the company also confirms that the price of the Realme 2 will be under Rs. 10,000, and touts that it will be the first smartphone to offer a display with a notch at such a price point. The Realme 2 is set to be unveiled at a launch event in India on August 28.

Apart from announcing Flipkart exclusivity, Realme also points at a few departments in which the successor of the Realme 1 gets an upgrade. It will sport a horizontally stacked dual rear camera setup and a rear fingerprint sensor as well. The Realme 2 will pack a 4,230mAh battery that is more than 20 percent larger than the Realme 1’s 3,410mAh battery. It will be made available in Diamond Red, Black, and Blue colour variants, and the back will sport the company’s trademark diamond cut designs, similar to the one seen on the Realme 1.

Realme was an Oppo sub-brand earlier, but then branched out as an independent e-commerce brandfor the youth demographic. Just a day ago, Realme and Qualcomm both confirmed that the Realme 2 will sport a Snapdragon processor, however refrained from saying which SoC exactly will be integrated. In comparison, the Realme 1 sports a MediaTek Helio P60 processor.

More details on the Realme 2 regarding exact price, and full specifications will be unveiled at the launch event in Delhi on August 28