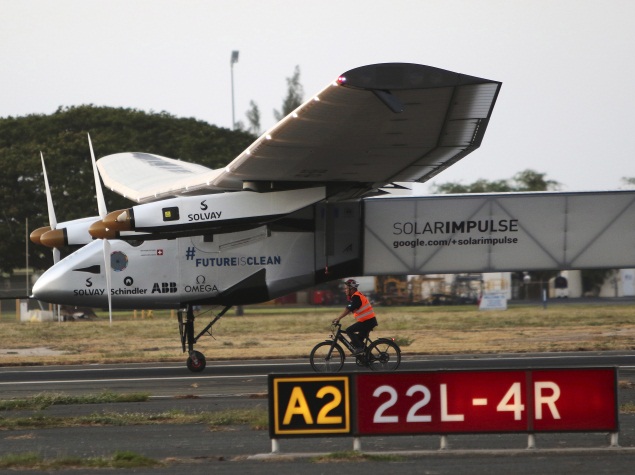 Solar Impulse spokeswoman Alexandra Gindroz said that the project had raised enough money to complete the repairs and fund the next phase of operations. (File Photo)

GENEVA:  The sun-powered plane Solar Impulse 2, grounded in Hawaii since the summer for repairs, will be ready to fly again by April 20, the project’s spokeswoman told AFP today.

The plane completed nearly half of an unprecedented round-the-world journey without using a drop of fuel before battery pack damage during a gruelling five-day leg from Japan to Hawaii in July forced its grounding.

Solar Impulse spokeswoman Alexandra Gindroz told AFP that the project had raised enough money to complete the repairs and fund the next phase of operations, confirming details given by pilot Andre Borschberg in an interview with Switzerland’s 24 Hours newspaper.

“April 20 is the first possible date for departure,” Gindroz said.

Borschberg told the paper that the April date marks “the opening of the optimal energy window, when the days are long enough and the nights are sufficiently short to fly.”

But, he added, details of the journey’s next leg have not yet been decided, with the possibility of flying from Hawaii to Vancouver, San Francisco, Los Angeles or Phoenix.

This uncertainty “makes the project difficult, but interesting,” Borschberg was quoted as saying.

“We do not know if we will cross the United States from the north, south… or centre.”

The original plan of leaving the US from New York’s JFK airport for the Atlantic crossing remains in place, he said.

The aircraft took off from the United Arab Emirates (UAE) on March 9, powered by 17,000 solar cells, with the aim of promoting renewable energy through a round-the-world flight.

The project has however suffered a number of hitches, aside from the battery damage, including an eye problem suffered by Borschberg which forced him to cut short a flight over Asia and return to Switzerland.

Borschberg and his partner Bertrand Piccard have divided the flying throughout the groundbreaking project.