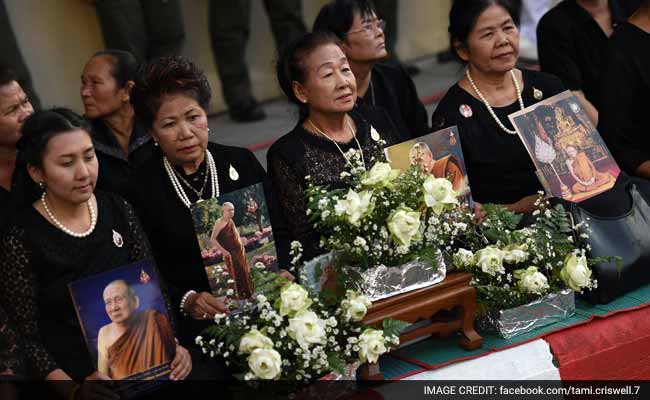 BANGKOK:  Thailand today cremated the kingdom’s top Buddhist leader more than two years after he died, in a long and elaborate ceremony attended by the Crown Prince.

The funeral pyre was lit by Prince Maha Vajiralongkorn, 63, who rarely makes public appearances but has recently been more in the public eye to highlight his role as heir apparent amid increasing anxiety over his father’s health.

Thousands of people, wearing black and holding photos of the late Buddhist leader, lined the streets to watch as a carriage carrying an urn containing his remains was driven through Bangkok.

The Supreme Patriarch, Somdet Phra Nyanasamvara, Thailand’s most senior monk died in October 2013 aged 100. He had been hospitalised for more than a decade prior to that.

The cremation took place more than two years later, according to the country’s traditional customs for royalty and Buddhist leaders.

“It is the royal tradition to keep the body for a long time,” Somchai Surachatri, a spokesman for the National Office of Buddhism told AFP today.

“It takes a long time to prepare the flowers, details, prayers,” he said, adding that funerals for the royal family took even longer to prepare.

The king’s sister Princess Galyani, who died of cancer in January 2008, was not cremated until November 2008 — which was the country’s last full-scale royal funeral.

King Rama VIII, the brother of the current king, died on June 9, 1946. The funeral and cremation ceremony took place March 1950.

The 88-year-old monarch is revered among many Thais but has been in hospital for much of the last two years and is rarely seen in public.

Buddhism is Thailand’s state religion and around 95 percent of the population is believed to follow it.

But the behaviour of the clergy frequently falls under the spotlight with media reports uncovering cases of clergy taking drugs, drinking, gambling and visiting prostitutes.