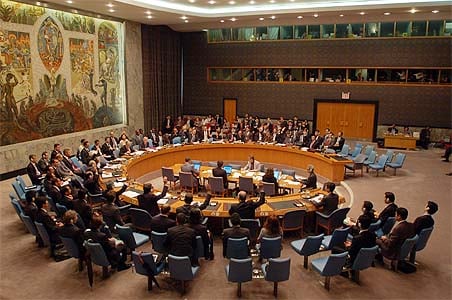 UNITED NATIONS:  UN Security Council has unanimously adopted a resolution to cut off all sources of funding to ISIS and Al-Qaeda with finance ministers from the member nations vowing to increase sanctions against the terror groups.

In the resolution adopted yesterday at the first-ever meeting of finance ministers, the 15-member body called for enhanced actions, from closing financial system loopholes to stopping the abuse of charitable causes, as well as updating the existing ISIS and Al-Qaeda Sanctions List.

At the session presided over by American Treasury Secretary Jack Lew under US’ monthly presidency, the Council stressed that already existing resolutions mandating nations to ensure that financial assets are not transferred to terrorists by persons within their territory “shall also apply to the payment of ransoms to individuals, groups, undertakings or entities on the ISIS and Al-Qaeda Sanctions List regardless of how or by whom the ransom is paid.”

The resolution called for increased international cooperation in sharing information and closer collaboration with the private sector to identify suspect transactions.

The Council also called on Member States to promote enhanced vigilance by persons within their jurisdiction to detect any diversion of explosives and raw materials and components that can be used to manufacture improvised explosive devices or unconventional weapons, including chemical components, detonators, detonating cord, or poisons.

Mr Lew told the Council that ISIS is a challenging financial target. He said, “Unlike other terror groups, ISIS derives a relatively small share of its funding from donors abroad. Instead, ISIS generates wealth from economic activity and resources within territory under its control.

“ISIS’ financing has evolved from seizing territory and looting bank vaults to leveraging more renewable revenue streams: so far, ISIS has reaped an estimated USD 500 million from black market oil and millions more from people it brutalises and extorts,” he said.

He stressed that while the resolution is a critical step, the real test will be determined by the actions nations take individually after its adoption.

“We need meaningful implementation, coordination, and enforcement from each country represented here, and many others. As we have all learned – with our work to counter Al-Qaeda, ISIS, and other groups to date – the successful use of these counter-terror financing tools requires robust domestic implementation, deep collaboration with private partners, and intense multilateral coordination and information-sharing,” Mr Lew said.