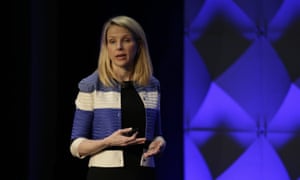 Yahoo’s board has hired three investment banking firms to evaluate potential bids for its internet operations in the clearest sign yet that CEO Marissa Mayer may not have much more time to turn around the struggling company.

Mayer believes the overhaul will boost profits and sharpen Yahoo’s focus on mobile apps and other services most likely to revive the company’s revenue growth after years of decline.

Some Yahoo shareholders frustrated with a steep drop in the company’s stock price have been pushing for a sale of the internet operations instead.

The board has now responded to that pressure by hiring investment bankers Goldman Sachs, JP Morgan and PJT Partners to set up a process for meeting with companies interested in buying all or parts of Yahoo’s business. A special committee of Yahoo’s directors will discuss the options with the bankers and the company’s legal advisers, Cravath, Swaine & Moore.

While the board mulls those alternatives, Mayer will continue to pursue a turnaround plan that includes jettisoning 15% of Yahoo’s workforce.

“We believe that pursuing these complementary paths is in the best interests of our shareholders and will maximize value,” Yahoo chair Maynard Webb said in a statement.

Mayer also is trying to spin off Yahoo’s internet operations into a newly created company while leaving behind prized stakes in Alibaba Group, a rapidly growing internet company in China, and Yahoo Japan. The proposed spinoff might not be completed until next year, if Yahoo’s internet business isn’t sold before then.

Yahoo didn’t identify any of the potential bidders that it might meet. Verizon has publicly said it might be interested in buying parts of the company after paying $4.4bn last year to snap up another fading internet company, AOL.

Analysts believe Yahoo’s other likely suitors may include AT&T, Comcast and various private equity firms that specialize in snapping up troubled companies with well-known brands such as Yahoo.

Virtually all of Yahoo’s current market value of $28bn is tied to its stakes in Alibaba and Yahoo Japan. The holdings in Alibaba alone are valued at $26bn.

Analysts still believe Yahoo’s lineup of still-popular services such as email, sports and finance could fetch several billion dollars in a sale.